I can't believe it...slimtimer is down this morning and there aren't any updates, aren't any nothing. What is goin on!?

Contrary to appearances, Card in Hand is not dead - it is however slow going. But, things are changing, and have changed so much over the past 3 years that I thought it might make sense to document the life of CardInHand (and its predecessor). From the beginning. And so...

Back in the Fall of 2004 I decided to take a Spanish class. How exciting. Immediately I realized that I needed some flashcards, and dutifully filled out quite a number. But, I had an old PalmIII and thought that there's gotta be some good study program out there. At first, I couldn't find any mostly because I wasn't looking hard enough and also b/c, hey, I'm a programmer - I like to make things. I threw together a program with SuperWaba, a mobile Java runtime. 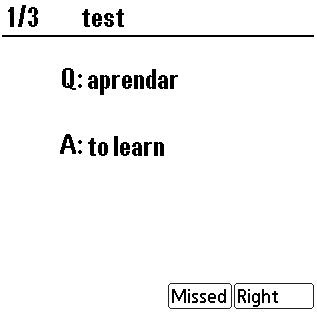 FlashCards v0.93
My goal was to have the Palm monitor my progress through the flashcards. Pretty quick I learned that there was an algorithm that did just this. It was called the Leitner method. My program, called 'FlashCards', duplicated this method. 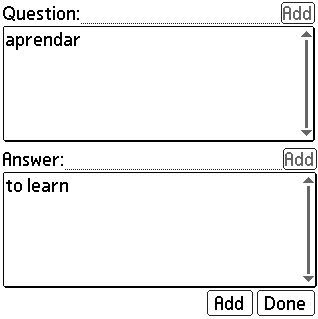 FlashCards v0.93: Edit card data screen.
This first version let you create your own cards on the Palm, and it would selectively quiz you on the flash cards based on how you had done before. 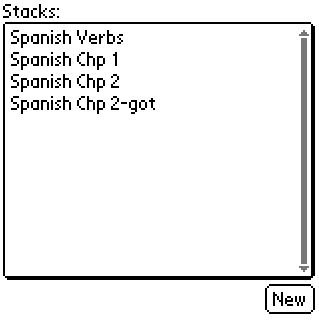 FlashCards v0.93: list of decks of cards on the Palm.
On the whole, the program did exactly what I needed it to. Unfortunately, it was pretty hard to see exactly what it was it was doing. How was it selecting the cards you saw? How was I doing? My next version of the program set to address these problems.

serialization and SOAP and...

I am struggling to figure out the best way to procede with regard to the card in hand webapp. My data classes have a custom serialization for the superwaba library that I was using in the first two versions of the application. It all looked okay to simply extend that, and use it for j2me. I made a j2me implementation and it works find for serializing all the data.

But the problem I'm having is that now I want to extend or project these data classes into the rails world - or something like that. At first I thought I needed something of a separation of logic from the data. That is have plain empty bean classes and a parallel class for all logic. I could then use the beans easily within a webapp framework (I'm using xfire at the moment). But then I came accross this wonderful anti-pattern description.

I completely see this anti-pattern being what I was about to do: separate all the logic out of its associated logic. Wrong. However, since I'm resolved to implement a webapp to expose both data and specifically logic to the world I do have to consider how I keep the application layer thin - keep logic out of the webapp layer, when I'm accessing logic only available in my data classes on the Java webapp.

Right right. It doesn't make sense to have useless structural code. We all like the idea of MVC, but it is senseless to brainlessly recreate data only classes and not associate it with the appropriate logic. Not that any non-Java SOAP client would be able to use this logic...

At the moment I'm madly converting all of my data classes into Beans, so that I can send them over the wire. But I'm beginning to doubt that this is the best method to attain my end. Its either that or, recreate a custom parser on each end for my flavor of binary. That doesn't sound fun.

After much much too much head scratching I have discovered 'the way' to develop with maven in general. Maybe I'll write up a little more in depth description of 'the way' later, but for now a summary:

Back to getting that J2MEPolish example running. Again, I was missing a dependency:

Rather than writing a maven plugin for proguard (yes there should be one, no I'm not writing it to get an example application running), it was simply a matter of using the Ant taskdef from within groovy. Here is my groovy script:

This weaved together underlying dependencies, preverified, and made the jad. I then used the mpowerplayer to run the app. It had a little issue with localization, but apart from that the app really ran. Wow, that took a week of odd hours.

Rather than integrating proguard directly in maven2, I decided to follow the directions over at the proguard site to integrate it into the WTK.

Hmm, but that didn't do anything. I think maybe that only works if you use something in the wtk folder to build the project. Darn.

There is a plugin for proguard out there. I guess I'll have to look it up. Didn't find one, I've submitted a question to the proguard mailing list to see what I can find out. I think I'm gonna have to write my own.

Making some progress here. After I got the java files to compile, the next step is to have the WTK preverify my compiled classes. Someone, Frank Seidinger bless his soul, has created a maven plugin for j2me. It'll do the preverify and the jad creation. It's currently in the codehaus sandbox, so you have to surf through the subversion repository, check it out, and compile it yourself if you want to use it.

I found out I was still missing something - the j2me java.lang.Object! Oops:

I can even get it to generate the jar files...but there is a slight problem. Since this is a j2mepolish example, well, there are some j2mepolish requirements...and those aren't in my jar file. How do I make them go in?

The samples don't work out of the box for J2MePolish, because wtk2.2 isn't for osx (linux). I copied the preverify app from mpowerplayer over wtk2.2's - now the samples compile! I can use the mpowerplayer application to run the j2me sample application. Sweet.

Now...maven? I copied over one of the sample application from J2MEPolish into a stock maven2 project.

I got some of the sources to compile by adding in the WTK libraries one at a time. So far I've only added a few jars for WTK:

And a few more jars for J2MEPolish:

And here are the dependencies:


Hey it actually compiles in maven. Thats a start I guess.

I remember that last year a friend of mine tried to start doing j2me work on OSX, and he had a lot of trouble. Sun doesn't provide an OSX package of the WTK, or any emulator. You gotta cobble together the thing yourself. So far I've gotten thus far:

Remaining items to scratch my head on:

1. Do I need to use J2MEUnit?
2. How am I going to integrate the wtk and building into my maven2 project?

Site Temporarily Back Up

The website is still down, but in the meantime, I've setup the installer so that people can at least install their desktop tool.

Hopefully I'll get those repository dumps by the weekend so I can put up the real site and start making a few sales!